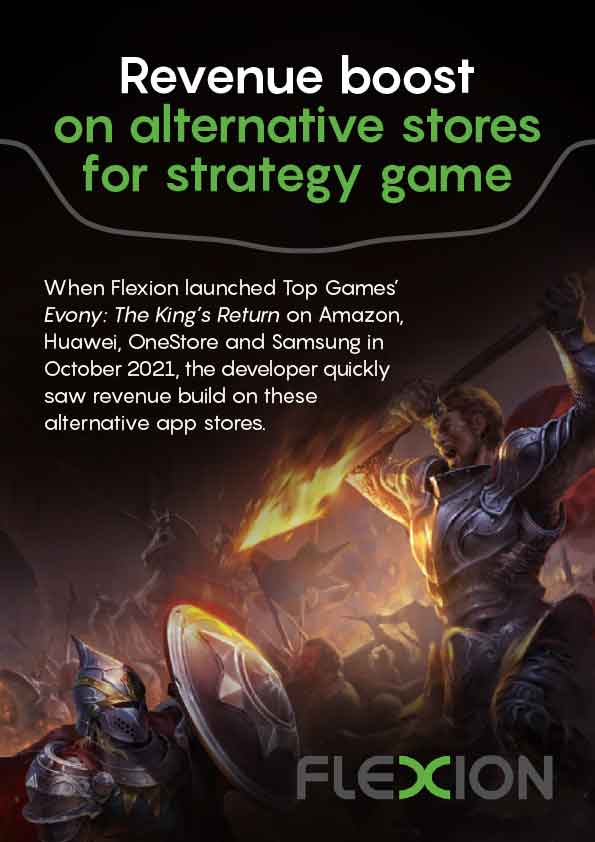 “It’s a real feather in our cap,” says Jens Lauritzson, Flexion’s CEO. “Top Games had already launched Evony: The King’s Return on Amazon and so they know it can be hard work growing an audience and getting a return on investment. For us, we spend all day, every day working with the alternative app stores, understanding how to get the most out of them. It’s only when you throw our expertise into the mix that the alternative app stores become a real opportunity.”

Top Games Inc is a global game developer and publisher bringing fun to players in more than 150 countries. It used Flexion’s expertise to relaunch on Amazon as well as launching for the first time on the three other platforms.

“Evony: The King’s Return, is already a big game,” says Jens. “But Top Games is achieving a chunk of extra revenue with very little effort and no up-front costs. That makes a huge difference to their return on investment calculations.”

Evony: The King’s Return is an enormously popular strategy and puzzle game, ranked 4.4/5 by users on the Huawei App Gallery. Players get to be monarch of 7 kingdoms, building cities and training troops to fight battles in real-time on a stunningly animated world map.

“The alternative app stores add to the game’s overall success,” says Kevin Lee, marketing director at Top Games.
“We’re delighted to partner with Flexion because it helps us reach a wider audience, allowing players on other devices to experience our amazing game.”

Although launching a game on other platforms will usually bring in more revenue, the costs can quickly get out of hand. You need to make different game builds for each, there are different submission formats, and multiple commercial and operational contact points. If you don’t put time and effort into getting your game featured, and promoting it on each platform, the revenue can be disappointing.

Flexion has tried-and-tested software to automate each new game build and it has people with the relationships and expertise to ensure a game achieves the best exposure. It develops app store artwork and descriptions to suit and takes advantage of promo opportunities tailored to each platform.

On Amazon, for example, Flexion kept the store informed about Evony: The King’s Return upcoming events and sent matching creatives for promotion. Amazon keeps Prime members updated with a flash communication called Insider. Insider promotions for the game had the most success. We ran a campaign on launch and followed that up with Christmas and New-Year’s Eve promotions. These included billboards and hero banners.

Flexion also ran special events for Valentine’s Day and Women’s Day. Events keep a game front of mind with users, but also tend to boost in-app purchases. Meanwhile we were driving similar activity on the other three platforms, so the combined revenue continues to grow.

“It’s exciting to see a game like Evony: The King’s Return reach a whole new audience and to be so well received by them,” says Jens.

“Even a big developer like Top Games is benefitting from Flexion’s approach.”

To learn more about how Flexion can grow your game’s audience and revenue please contact:
hello@flexionmobile.com

Back to Case Studies